“Fauna” comes from the Latin names of Fauna, a Roman goddess of earth and fertility, the Roman god Faunus, and the related forest spirits called Fauns. All three words are cognates of the name of the Greek god Pan, and panis is the Greek equivalent of fauna. Fauna is also the word for a book that catalogues the animals in such a manner. The term was first used by Linnaeus in the title of his 1745 work Fauna Suecica.

Fauna can refer to the animal life or classification of animals of a certain region, time period, or environment.

Cryofauna are animals that live in, or very close to, ice.

Cryptofauna are animals that are rarely seen and may be extinct or mythological.

Infauna are benthic organisms that live within the bottom substratum of a body of water, especially within the bottom-most oceanic sediments, rather than on its surface. Bacteria and microalgae may also live in the interstices of bottom sediments. In general infaunal animals become progressively smaller and less abundant with increasing water depth and distance from shore, whereas bacteria show more constancy in abundance, tending toward one billion cells per milliliter of interstitial seawater.

Epifauna, also called epibenthos, are aquatic animals that live on the bottom substratum as opposed to within it, that is, the benthic fauna that live on top of the sediment surface at the seafloor.

Megafauna are large animals of any particular region or time. For example, Australian megafauna.

Meiofauna are small benthic invertebrates that live in both marine and fresh water environments. The term Meiofauna loosely defines a group of organisms by their size, larger than microfauna but smaller than macrofauna, rather than a taxonomic grouping. One environment for meiofauna is between grains of damp sand (see Mystacocarida).

In practice these are metazoan animals that can pass unharmed through a 0.5 – 1 mm mesh but will be retained by a 30 – 45 μm mesh,[2] but the exact dimensions will vary from researcher to researcher. Whether an organism passes through a 1 mm mesh also depends upon whether it is alive or dead at the time of sorting.

Mesofauna are macroscopic soil invertebrates such as arthropods or nematodes. Mesofauna are extremely diverse; considering just the springtails (Collembola), as of 1998, approximately 6,500 species had been identified.[3]

Select the desired category
to navigate 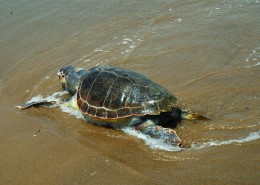 The territory of Sitia, due to its unique geographic location, is home to a large number of characteristic animals of the island, especially migratory birds. Twenty of the bird species that have been sighted in the area (migratory, indigenous) are in the Red Data Book of  Threatened Vertebrates of Greece.

Birds visitors can observe in coastal areas are the Little Egret (Egretta garzetta), Cory’s Shearwater (Colonectris diomedea), the European Shag (Phalacrocorax aristotelis), (the European Storm Petrel), the Western Marsh Harrier (Circus aeruginosus), Audouin’s Gull (Larus audiouinii) and the Woodchat Shrike (Lanius sanator sanator). Of the predatory and scavenger birds, the most characteristic are Eleonora’s Falcon (Falco eleonorae), the Golden Eagle (Aquila chrysaetos), the Peregrine Falcon (Falco peregrinus), the Common Buzzard (Buteo buteo), the Lesser Kestrel (Falco naumanni), the Griffon Vulture (Gyps fulvus) and the Bearded Vulture (Gypaetus barbatus). The Bearded Vulture occasionally makes an appearance in the area and it is one of the most important species on the island as the Cretan population is the only reproducing population in all the Balkans.

As far as mammals are concerned, 14 species have been recorded in the Park area, four of which are cetaceans, like the strictly protected Bottlenose Dolphin (Tursiops truncatus), and the Mediterranean Monk Seal (Monachus monachus), the Striped Dolphin (Stenella coruleoalba) and the Common Dolphin (Delphinus delphis). Of the land mammals the most characteristic is the European Hare, the Least Weasel, the Beech Marten, the European Badger, and the Spiny Mouse, while in caves there are Pipistrellus savii bats, a strictly protected species.

One of the most important reptiles of the area is the Caspian Turtle (Mauremis caspica), the only species of water turtle on Crete that can be observed in streams in the palm forest of Vai, in the canyon at Toplou Monastery and, mainly, in Kato Zakros. Furthermore, the Caretta caretta sea turtle breeds on the sandy beaches of the Vai palm forest, in Kouremenos and in Xerokambos. Very important to the area are the Podarcis cretensis lizards, which are the only indigenous lizard species on the island, and the Ocellated Skink (Chalcides ocellatus), which is found in Italy, Greece and North Africa, and which is mistakenly considered poisonous on Crete.

Of the snakes in the area none are dangerous to humans. The Balkan Whip Snake (Coluber gemonensis) and the European Rat Snake (Elaphe situla), the most beautiful snake in Greece, are completely harmless to humans, while the European Cat Snake is the only snake on the island with venom, which, however, is very weak and secreted from its back teeth, a fact that renders it virtually harmless.