They are the only places where human intervention is impossible and, therefore, the most endemic flora species are present in the canyons and on the steep rocks of the escarpment.

The region of  Sitia is characterized by the existence of exceptionally beautiful canyons which were created at the beginning of the Pleistocene period, a period during which Crete developed its present form approximately two million years ago.

The dramatic tectonic changes which actually created the island of Crete had a huge impact on the creation of the canyons, which took their present form due to other natural causes such as water erosion.

The geological structure of the region of Sitia advanced the development of canyons, which in turn contributed to the configuration of a geological and morphological landscape rich in alterations.

It is a canyon full of beautiful formations of pine trees Pinus brutia. Pine trees are the only vegetation in the canyon. It begins southernmost of the village Peukoi, which is a traditional and very beautiful settlement, and it ends northernmost of the region White River in Makri Gialos.

The path that follows the stream bank is well-preserved and the hiking there can be quite pleasant and easy. Its length is approximately two kilometres, its width is about 90 metres its depth ranges from 10 to 120 metres and its altitudinal distance input and output is about 300 metres.

The Canyon of Pervolakia or Monastery of Kapsas

We have already reported previously on the significance of the biodiversity of this landscape. There are lots of rare endemic species and geological structures that make up a wild and imposing canyon.

Hiking can easily be completed without any special problems, except for very few spots where the hiker needs to be very careful. The length of the canyon is about 4 kilometres and its entrance is in the south of  Pervolakia village while its exit lies at the beach of the monastery of  Kapsas.

Canyons in the region of Goudouras

Canyons in the region of Goudouras.

They are short in length (about 1,5 kilometres) but they are the roughest in the region and the potential hiker needs to be very careful, skillful and experienced and in many cases well-equipped.

However, their cavernous, vertical rocks create perfect sanctuaries for the avifauna and rare endemic plants are found on these steep rocks of the canyons as well. These canyons are: The Canyon of  Saint Antonis, which was named after the small church that is built in the north entrance of the canyon, which ends at Goudouras village.

There is also the canyon that begins from the village Mesa Apidi and at a particular point of its route meets a second bifurcation at the abandoned settlement called Samakidi and ends in the north of Goudouras and lastly there is the canyon of Asprolithos, which is a small, rough canyon ending up in the northwest of the village Goudouras.

The Canyon of Holy Irene.

The Canyon of Holy Irene.

It is also a very beautiful, small canyon with steep slopes but it is rather narrow at some points.

It is a very impressive canyon with tall, vertical rocks and lots of caves. One may enter the canyon either from the settlement of  Hametoulo or a higher spot in the position Lamnioni. There are lots of flora species.

The canyon is also ideal for the observation of avifauna, especially raptors. Its well-preserved and structured path was once used by the villagers for their transportation to the beach of  Xerokambos.

After the site Agrilia, at the point where the most of the branches of the canyon are united, a very impressive landscape with extraordinary caves is created.

The distance from this point until its exit at the beach of Katsounaki is about 1500 metres. At the beach katsounaki one may see sand dunes containing Ammophtla arenaria. The sea lilies catch the hiker’s attention, especially during their bloom at the end of July to September.

There are other flora species as well such as finokalia Thymelaea hirsuta and the sea thorn Eryngium maritimum.

The Canyon of Kato Zakros

The Canyon of Kato Zakros

It is one of the most visited canyons of  East Crete because of its rare biodiversity as well as the archaeological importance of the region of Zakros as there is the Palace of Zakros – the fourth largest palace of Minoan Crete, which catches the visitors’ attention.

Moreover, it is the last part of the European path E4. The number of caves on slopes, which during the Minoan period were used as cemeteries, the vertical rocks, the water present during most months of the year, the vegetation full of plane trees Platanus orientalis, hollies Quercus coccifera, oleaster, and oleander Nerium oleander fill the area with colours and perfumery.

There are lots of flora species, some of them very rare, which have found shelter on the steep rocks and slopes of the canyon. Some of them are the…

The hiking from the square of Zakros to the beach of Kato Zakros is very easy and it lasts 1,5 to 2 hours.

The path which begins at the settlement of Hohlakies is quite easy and it follows the configuration of the canyon and only in very few parts the hiker needs to be very careful due to the lubricity of the rocks in the streambed.

During the rainfall season to the end of April the journey gets really difficult and at points very dangerous depending on the height and the momentum of water as the stream is still full of  water.

The canyon is full of impressive geological formations. On the vertical rocks from left to right impressive caves are created whereas lots of avifauna species, especially raptors, nest on the steep rocks. The best period to observe the flora in the canyon is during the spring.

Lots of rare and important plants grow at the bed of the stream and its rocks such as Aristolochia cretica, Bellevallia sitiaca, Capparis spinosa, Delphinium staphisagria, Vitex agnus castus, Scorzonera cretica, Tulipa saxatilis, to name but a few.

There are also lots of aquatic species in the marsh formed in the exit of the canyon with the Juncus acutus (bulrush) being predominant. Because of the rock erosion on the coastline around the beach called karoumes a huge number of fossils have been revealed.

The Canyon of the Monastery of Toplou

Its entrance is in the west of the Monastery of  Toplou. The landscape is astonishing not only because of its flora and the existence of a cluster of the palm tree Theophrastos Phoenix theophrasti, clusters of  locust Ceratonia siliqua, oleander Nerium oleander, shinos Pistacia lentiscus, oleaster Olea europea ssp silvestris, but also its fauna which due to the existence of water in many parts gives shelter to the turtle Mauremis caspica.

The turtle is usually found in the ponds formed within the canyon throughout the year. The geological formations in the canyon are very interesting because they are made up of steep rocks and impressive caves as well as erosional forms called “Tafoni”.

At the end of the canyon to its exit to the sea the landscape changes becoming wilder and unique for the arid environment of East Crete. Although we expect to find water only in the entrance, all of a sudden we see it again in the lakes which are formed in a climax way at the exit of the canyon. It is a rare place with aquatic vegetation, running water all year round and rare reptiles.

The region is called Apoloustres which in the local dialect means small-sized lakes with source water animals drink water from. The journey is cyclical and the journey back goes through the smaller canyon towards the Monastery of  Toplou.

The Canyon of Faneromeni

The Canyon of Agion Panton – Faneromeni

It is a small and relatively accessible canyon which begins in the east of the area of Sfakidia, region of  Skopi, and ends in the moorage of  Faneromeni.

Although there aren’t any dangerous passes, the path is not distinctive. Its length is about 3,5 kilometres. At its exit there is a small wetland at the estuary creeks of Skafidara, which is also included in the presidential decree concerning the small island wetlands.

The canyon is impressive not only for its flora, but also for its beautiful geological formations.

The entrance is just before the village Exo Mouliana and it ends up at the beach of  Rihtis in the Cretan Sea. The path is well-preserved and it goes along the river which has constant flow during almost the whole year. Vegetation is astonishing because of its diversity in such an arid place as the East Crete.

The plane trees Platanus orientalis are dominant. Oleander Nerium oleander, ivy which climb up the tall trees and wild vines along with lots of annual plants and herbs made up the flora of the region. There are also lots of orchards full of different kinds of fruit trees.

An elaborate architectural arch bridge (Lahanas) connects the river banks and helps – until today – those who want to go to the other side. The canyon is also known for its twenty metres in length waterfalls. At its end there is a small lake as well.

It is of the unknown canyons of Sitia and it is formed between the villages Tourloti and Sfaka. In 1,5 kilometres distance lies the small plateau called Monokaras.

The journey is difficult as the path that goes along the stream of the river is not in good condition. Lots of flora species grow on the steep rocks of the canyon. 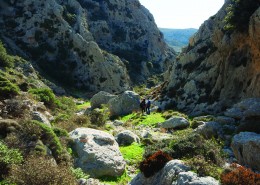 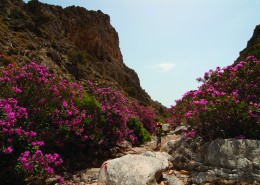 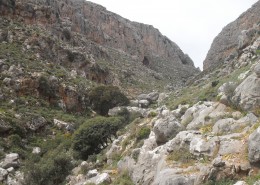