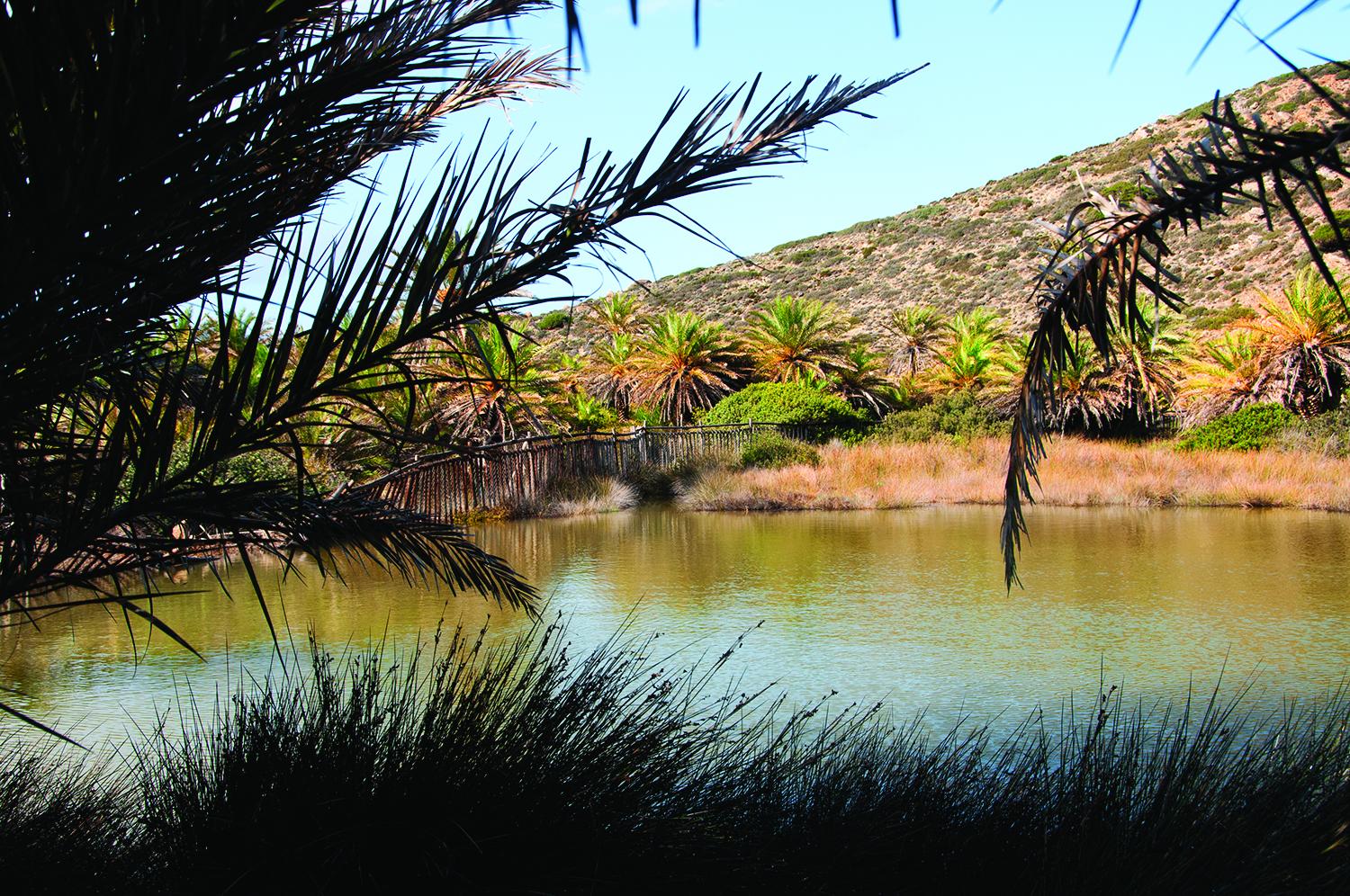 According to the definition given by the International Union for the Conservation of Nature and Natural Resources (IUCN), the term protected area refers to: “An area of land and/or sea especially dedicated to the protection and maintenance of biological diversity, and of natural and associated cultural resources, and managed through legal or other effective means”.

Our first stop is at the Northeast edge of Crete. This is an area of ecological importance as it contains priority ecosystems and significant areas for the birds in places of national and European magnitude.

The area has got a lot of natural and semi-natural kinds of natural habitats. These habitats include the largest number of land in the lowest altitudinal zone of Crete as well as a significant number of coastal wetlands. There is rich flora with approximately 550 plants, 16 of which are endemic in Crete, 14 are of Crete and Kasos – Karpathos, 21 are endemic of Crete and The Aegean, 2 are stenoendemic, 2 of them are nearly stenoendemic and 2 of the above kinds are also included in the instruction 92/43 EOK.

There is also rich avifauna with approximately 170 species four of which are globally characterized endangered and 60 species are included in the Unfavourable Conservation Status in Europe.

On The Dionysades islands and at the steep coast of the cape on Elasa island there is one of the biggest colonies of  Mauropetriti Falcon (Falco eleonorae) whose population composes 15% of the species global population. There are also recorded 14 species of mammals, 3 of which are cetaceans, eight species of reptiles and two species of amphibians.

A lot of these species are included in the instruction 92/43 EOK as well as the international contract of Berne. There is, therefore, an exceptional geological and soil diversity as the area has 12 different geological formations. Although the landscape is under pressure due to the agriculture, stock raising and tourism, it has managed to preserve its natural element in a remarkable degree.

The biggest settlement in the area is Palaikastro. Its inhabitants are engaged in the primary sector and tourism.

The Dionysades islands is a complex of three islands (Gianysada, Dragonada and Paximada) in the north of Sitia. Gianysada is an elongated island with East-West direction and steep rocky coast. Its length is 3,5 kilometres and its maximum width is 1 kilometre. Dragonada is the biggest island of the three. Its northeast part shelves down smoothly to the sea, whereas its southwest part forms a small plateau surrounded by steep shores.

Paximada is a small, triangle island with rocky shores. All three islands are uninhabited and exposed to saliferous winds. For this reason, vegetation is sparse and halophytes and brushwood are prevalent. In the northeast part of Dragonada there are scrub and sea-cedar Juniperus phoenicea and shinos Pistacia lentiscus. The three islands are important for their flora and avifauna.

The most important types of habitats we can find there are as follows:

The natural environment has a special ecological interest and value since the mountains of Zakros are included in the Net Natura 2000 GR4320016 Mountains of Zakros SPA ZEP (Special Protection Zone) and the region is significant for its avifauna.

It is also included in the List of the Important Regions for the Birds of Greece, which was drawn up by the Greek Society of Ornithology with code GR 195.

The source of Zakros, the canyon of the deceased, the cave of the Hewer and the rare flora and fauna of the region along with the numerous paths, attract lots of naturists and walkers.

The Natura region 2000 GR4320016 is situated in the south of  Zakros village and it stretches up to the Xerokambos area and the nearby massif. The vegetation mainly consists of brushwood. The maquis vegetation is very rare, especially in valleys and gullies. Although there is little rainfall in the region, there are remarkable sources and streams which in turn create special ecosystems that are scarce in the East Crete.

These habitats consist of gullies full of plane trees, Platanus orientalis, Nerium oleander, and wickers, Vitex agnus castus. There are a lot of deep canyons in the area, the most famous of which is called The Canyon of Zakros or The Canyon of the Deceased.

At the mouth of the stream in Kato Zakros there is a small wetland full of water throughout the year. In the area of Xerokambos lies one of the most important wetlands, the lagoon of Sitia, called Alatsolimni, which apart from the avifauna hosts rare flora on the coastal dunes.

The most important types of habitats within the area Natura 2000 GR4320016 Mountains of Zakros are :

The Koufonisi island and coastal zone

The area includes the Koufonisi island and the small islands in the north which are: Stroggyli (Round), Makrouli (Long), and Marmaro (Marble) and Trahilo (Neck) in the south. The Koufonisi island is a small island – one of the southernmost islands in Europe along with the islets Hrisi and -Gavdos. Its geographical position in the south – east part of Crete defines its climate as dry and hot which brings it closer to the climate of North Africa with all the characteristics of desertification present.

This landscape is one of the rarest in Europe and its special conditions have developed the particular flora and fauna in it. The perennial grasses sedge Lygeum spartum as well as Classifolium Erodium are typical in the area.

There are sandy and rocky beaches. The marine part of the region is quite representative and very well preserved consisting of marine caves, reefs, and seagrass beds Posidonia oceanica, which is a Mediterranean endemic sea angiosperm.

From a botanical point of view, flora and vegetation are extremely interesting because of the fact that they are characterized by the constant vegetation of North Africa, which is present in the form of many different plants only on this small island and it is somehow lost from the rest of Crete. There are no big trees present apart from few tamarisks Tamarix smyrnensis, which are planted on the beaches.

The rare habitat of the island is made up of some clusters of shinos and brushwood, and sand dunes with halophytes vegetation such as Ammophila arenaria and Cacile maritime. There are endemic species such as the Colchicum cousturieri, which is endemic in Eastern Crete, protected by the Contract of Berne and the Greek legislation and included in the red list concerning the endangered species.

They are also included in annex IV of the instruction 92/43/EEC. The following plants -  Zypophyllum album, Helianthemum stipulatum and Astragalus peregrinus ssp. peregrinous and also Erodium crassifolium – are also protected by the Greek legislation and are included in the red list concerning the endangered species whose spread is limited on these islands.

Other remarkable flora species are Fagonia cretica, which is a plant of the East Mediterranean, Cistanche phelypaea, Cynara cornigera and Pancratium maritimum. From an ornithological point of view, there are two significant birds in the area.

The Eleonora’s falcon or else Mauropetritis Falco eleonorae and the Artemis Calonectris diomedea. They nest on the rocks of the islands. The area serves as a station for the migratory birds. There has also been observed the shag Phalacrocorax aristotelis. The biodiversity of the marine habitats is also very important.

The area makes up of a superb fishery and place of nesting for the Mediterranean seal Monachus monachus, which usually nests in the marine caves and it is also a place of spawning for the sea turtle Caretta caretta. Last but not least, the area combines its biological with the archaeological and historical importance.

The whole island is full of ancient ruins which date back from the Early Minoan to the post-byzantine period and a lot of walkers as well as archaeologists have already observed them. The archaeological hoe has brought to light a magnificent civilization buried for centuries beneath the sand.

For example, a stone, Roman theatre of a thousand seats, which is the only ancient, surviving theatre in Crete, a complex of public baths and part of an ancient settlement in the east of the theatre, are few of the findings.

The fact that the access to the island is difficult to the visitor has a positive effect on the excellent preservation of all the habitats.

The Kavaloi islands, which lies opposite Xerokambos, is a complex of three small islands with steep rocks and very little brushwood vegetation, which serves the avifauna of the region since on the rocks of the islands nests Eleonora’s hawk or else Mauropetritis Falco eleonorae.

The monastery of Kapsas

The area is situated in the southeast part of Sitia. It includes a small canyon (3 kilometres) known by the name Monastery of  Kapsas or Pervolakion. The monastery of Kapsas was founded in the 15th century and it played a great role during the last period of the Turkish slavery during the 19th century under the abbacy of Gerontogiannis, a controversial figure, who was declared Blessed much later by the Greek Orthodox Church.

At the exit of the canyon to the sea there is a pebble beach. The marine part of the habitat covers less than 1% of the area. The habitats in the region include: inside steep rocks, slopes, fluvial landscape and brushwood in good condition. The area is of great aesthetic beauty. It is also very interesting for its flora since some endemic species are rare. The area includes 14 endemic and stenoendemic plants.

The geomorphology is also very interesting. The limestone of the Gavros – Tripoli type full of caves make up the rock of the heights around the monastery of Kapsas and the rift canyon directed north south in the west of the monastery.

At the bed of the canyon, which is usually dry for most of the year, the vegetation consists of the typical Cretan riparian vegetation including oleander Nerium oleander and wickers Vitex agnus castus.

The plant Tordylium hirtocarpum is protected by the Greek legislation (presidential decree 67/81), the Silene pinetorum is protected by the Greek legislation as well (presidential decree 67/81) and they are both included in the red list of facts (1993) classified as endangered and rare plants. The plant Brassica cretica ssp. cretica is “chasmophyte” and very rare.

On the vertical cliffs with the numerous caves a lot of predators and other avifauna species nest or find shelter. Near the monastery of Kapsas lies the settlement of Goudouras. The name “Goudouras” comes from the plant Hypericum triquetrifolium “Agoudouros” the ancient “Eritrean” which was once abundant and used for the sweeping of the threshing floors or as a substrate to desiccate the grapes and figs.

Select the Natura 2000 area you wish
and find useful information.
_____